Viticultural development in the Alentejo

If there is a wine region of Portugal where the pace of transformation in recent years has been vertiginous, it is undoubtedly the Alentejo. Indeed, in a few years, the Alentejo region went from being of secondary importance and almost insignificant in viticultural terms to becoming one of the main viticultural regions in the country, and even took the lead in terms interest in its products from domestic consumers, something which bears testimony to the progress made. Quite apart from evaluating whether the sweeping changes in the viticultural sector were the cause or consequence of this development, by considering the past fifty years alone, we can distinguish at least three distinct periods which could be characterised as follows:

1. Resistance – This period runs roughly to the end of the 1960s or the beginning of the 1970s and represents a time during which viticulture was of marginal agricultural significance within the region. The continued existence of viticulture in certain areas of the Alentejo was due largely to these areas being made up of predominately smaller pieces of land which are not very well suited to the production of cereals and extensive livestock farming, but are better suited to olive groves, vineyards and a little horticulture, and due to the existence of cooperative wineries which made it possible for all these small growers who could not deal with the market independently to organize themselves in such as way as to produce wine of good quality from their grapes at very competitive prices. We can say today that if the vineyards did not disappear during this period, it was solely because the exceptional natural conditions for growth made up for the agricultural policy at the time to remove them in conjunction with the well‑known incentives to grow cereals, and guaranteed consistent quality in the wine produced, at a price high enough to cover the costs of producing this labour‑intensive crop. It was a very labour‑intensive crop indeed, in that most jobs were either carried out manually or used animal traction, from planting and grafting to soil maintenance, phytosanitary treatments, and harvesting. The wave of mechanisation which spread across the agricultural landscape of the Alentejo was aimed specifically at the production of cereal crops, and grapevines, as a secondary crop, benefited only where its vine conduction systems at the time would permit. As an example, the narrow spacing between the rows of vines hindered the use of tractors, and animal traction was still being used in vineyards even after wheat production had been 100% mechanised.

Traditional grapevine varieties predominated, but in some cases were abandoned in favour of more productive varieties, not much importance was attached to the loss of oenological capital inherent in traditional grapevine varieties. This was how particularly the white varieties spread, and varied little from one region to another: the Boal de Alicante, the Diagalves, the Manteúdo, and the Rabo de Ovelha. The red varieties included the Carignan and the Moreto. The lack of interest in the crop prevents a repeat of what happened in the Oeste and Estremadura regions. In other words, the fact that viticulture was practised mainly by small farmers with a very conservative view of how vineyards should be cultivated, with little contact with the outside world, and without ambition for the development of their vineyards, saved the Alentejo from an influx of commonplace grapevine varieties and mass production.

2. Affirmation – Affirmation was achieved during the 1970s and 1980s when a certain kind of conservative, traditional viticulture was able to present its product as having value‑added quality to the consumer who had acquired greater purchasing power. The wine of the Alentejo, the product of a viticulture which is both characterised by and adapted to the region, gained the interest and respect of the market, and as cereal farming fell into a downward spiral, wine started to be seen as a serious alternative in agricultural terms. Viticulture was no longer an activity confined to the small farmer, but became a agricultural enterprise for the most dynamic of the large farmers too. The area under cultivation grew, but the market grew even more, which resulted in an exponential rise in grape prices, which ended up in a race to the Alentejo vineyards by various investors, who were so very different to the traditional farmers.

The demarcation of the region in 1985 helped to consolidate the region by providing a means of technical support to the grower in terms of grapevine variety certification, thus conferring credibility to an entire line of business for which until this point, little or nothing had been structured. The expansion of the crop and the attention given by another type of more advanced farmer is what brought mechanisation to viticulture. Vineyards were adapted to enable tractor access, but only on those estates where cereal cropping already existed. Spaces between the rows of vines were widened up to as much as 3 metres, with 2.7 and 2.8 being the most common. The ploughs and harrows came into the vineyard and planting began to enjoy the benefits of mobilization at great depth. Use of front loader with a back hoe digging to a depth of up to 1.5 metres, regardless of the profile of the soil in question, became widespread. The vineyard became larger and the soils with higher fertility and greater hydric capacity, which, combined with better fertilisation and more careful attention being paid to phytosanitary protection, resulted in better yields. Irrigation was not yet available, however and variations in yield from year to year were enormous, governed as they were by the amount of rain stored from the previous winter. Planting of traditional regional grapevine varieties prevailed, largely because of the oenological requirements and structure of the Cooperative Wineries, which exerted their influence on grower members, and after 1985, because of the statutory demarcation of the region, which fixed the recommended and authorized grapevine varieties for each sub‑region of the Alentejo. The red varieties are Periquita, Trincadeira, Moreto, Alicante Bouschet and Aragonez, and the white, Roupeiro, Rabo de Ovelha, Tamarez and Diagalves, in decreasing order of importance.

3. Revolution – From the mid‑1990s to the present day, the growth of viticulture in the Alentejo has achieved a momentum which verges on being unsustainable. Spurred on by the high income derived from grapes compared to other agricultural products, and by the availability of European funds to support the restructuring and expansion of new areas, both the cultivation of vineyards and the construction of wineries has grown at a pace impossible for the market to assimilate. Yet, it is a viticultural industry clearly orientated towards the market, towards seeking to incorporate all innovative elements in order to sustain its competitiveness, and structured towards meeting strict oenological requirements. As far as grapevine varieties are concerned, this period saw the biggest introduction ever of new varieties foreign to region, whether they were national, or even international varieties. The relative importance of traditional grapevine varieties was also completely changed. For example, grapevine varieties such as the traditionally uncontested Moreto and Periquita lost their importance whilst an explosion of the Aragonez and the rebirth of the Alicante Bouschet occurred. Grapevine varieties introduced from outside the region included the Cabernet Sauvignon, Syrah and Touriga Nacional. As far as the white varieties were concerned, no one wanted to hear about the Rabo de Ovelha, Manteúdo or Tamarez, and instead the Antão Vaz and the Arinto were developed, although the Roupeiro has still managed to hold its own. The region has nevertheless become increasingly open to accepting new grapevine varieties which can adapt the profile of white Alentejo wine to the profile of the new consumer. Both the necessity for innovation and orientation towards consumer preference exceed even the rapid pace of regional statutory regulation, which confines itself to lagging behind the reality of the times, by consolidating these developments as best it can by issuing successive amendments to regional demarcation regulations.

At the level of the vineyard, grape production is becoming specialised and is no longer seen as a secondary agricultural activity but as a primary one, particularly in terms of its value as a source of revenue in relation to the amount of labour utilised. Vine spacing is adjusted to make it as appropriate as possible for the vine conduction system in place, and the space between rows has been reduced to 2.5 m, because special tractors with narrower axles are now used. The trellis system follows the requirements of mechanisation and makes vine conduction along the horizontal trellis (bardo) effective, and is the most common method for training the main branches to achieve optimal light reception. Irrigation is considered essential, both for the installation of new vineyards, whether to regulate or improve quality, not to mention the significant, positive impact it has on yield. Because of the introduction of irrigation, yield has ceased to be correlated with the amount of rainfall received in winter, and has become much more consistent. Vineyard plantations are now carried out using rooted grafts and material which has been the subject of grapevine clonal selection and mass selection, thus providing more uniform vineyards with monovarietal plots Phytosanitary treatments have now become more appropriate in that they conform to integrated pest management standards and take into account improved knowledge of pests and diseases affecting the region. As regards soil maintenance of the soil, the absurd practice of ploughing as a method of combating weeds and digging up the soil between rows is disappearing and being replaced by surface herbicidal treatments. Viticulturalists in the Alentejo today use the most modern information technology available, and pay much attention to production costs, the environmental impact of the crop, and are clearly geared towards the international market in terms of grapevines varieties, vinification methods, and products in demand. Given its natural soil and climatic conditions which clearly favour viticulture, together with a land tenure system which encourages the use of inputs, and mechanisation in particular, the Alentejo may well be referred to as a model viticultural zone at international level – even if conditions of global competition in which we seem to find ourselves get more difficult, and the profitability of viticulture is significantly diminished. 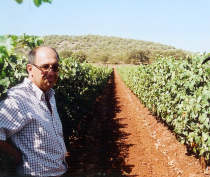