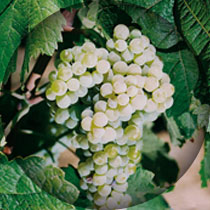 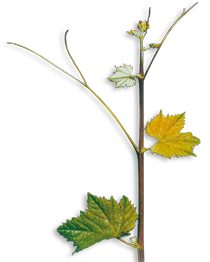 Origin: In 1721, Alarte referred to the excellent quality of this variety. Brotero (1788) noted its small berries and high acid content. Silva and Telles (1790) knew of the existence of this variety in the Beiras, the Douro and Estremadura, as did Lacerda Lobo (1790) in Minho under the synonym Pedernã. By contrast, Lapa (1866/7) refers to Évora, Arruda, Torres Vedras, Colares and Carcavelos. Menezes (1896) mentioned Bucelas and Portalegre.

Chief areas of distribution: All over Portugal.

Young shoot: Red stripes on the dorsal side of nodes and internodes, green buds.

Time of bud burst: Late, 9 days after the Fernão Pires.

Length of internodes: Varies. Some medium to long, others long.

Tendency to form lateral shoots: Medium, particularly in the case of longer shoots.

Rate of multiple bud bursts: Some medium to long, others short.

Sensitivity to abiotic factors: Sensitive to wind before flowering, and to soils with poor water retention.

Susceptibility to fungal diseases: Susceptible to Peronospora, Oidium, Excoriosis (Phomopsis viticola Sacc.), and Bunch Rot. Has some resistance to Anthracnose.

Susceptibility to Pests: Susceptible to the vine leafhopper and the grape berry moth.

Bunch density: Dense to very dense; sometimes bunches come apart on their own.

Vineyard conduction system: Yield increases with arched cane training systems, although the Cordon Royal is common. It is difficult to achieve the correct balance between quality and quantity. This variety has large leaves; pruning is therefore recommended to prevent the foliage from becoming too dense.

Soil requirement: Acid or calcareous soils, deep and moist, but well-drained, and not too dense, with orientation towards the North.

Vine density: Vine should be spaced 1 m apart, in rows at intervals of 2.5 m.

Rootstock: Compatible with almost all rootstock. It is important to achieve a balance between vegetation and fruit. Rootstock with lower vigour is therefore recommended (420 A, 3309 C, 196-17, SO4).

Spoilage of mature berries: Some blue mould rot, but very little drought damage on the bunch.

Risk of oxidation of must: Low.

Risk of oxidation of wine: Low.

Ageing Potential: High; the wine improves with ageing. Suitable for storage in barrels.

Wine Descriptors: Clear lemon yellow, sometime with mineral notes of medium intensity. Over the course of ageing, it develops an aroma reminiscent of honey, but also a little of kerosene. One tastes the acid in the mouth, but in a wonderful interplay with fruity tones. (P. Laureano).

Wine quality: Very high, given the right vineyard conditions. Pilot grapevine variety, even though it is somewhat difficult to cultivate. The Arinto poses a challengue for oenologists, too.