The Presence of Ancient Vitis Silvestris Cultivars in Iberia

The populations of the Eurasian wild grapevine spread from the Iberian Peninsula as far as the Hindu Kush and the Maghreb. Their cultivars belong to Vitis vinifera L. ssp. sylvestris (Gmelin) Hegi, and are the dioecious parental generation of today’s cultivars. The latter are essentially hermaphrodite, although female varieties do exist (Maghradze et al., 2010). In his Eclogues, Virgil refers to wild grape clusters on woodland vines (silvestris) as labrusca, a description which exists in Romance languages such as Portuguese, Spanish, and Italian. In Portugal they are known as videira brava, videira silvestre, and parreira brava. Spanish geography mentions the vid silvestre, parra moruna, parrón, uva de zorra, zozo mahatsa, and mahatsamandoa, amongst others.

Böhm (2010) hypothesizes that the subspecies found a refuge on the Iberian Peninsula in the last glacial period – the Würm glaciation. Paleontological evidence from the Middle Pleistocene was found in the El Padul tombstones in Granada (Florschütz et al., 1971), and in the river basin at Laguna de las Madres in Huelva (Stevenson, 1985). According to references by Rivera and Walker (1989), wild grape berries have been a human food source on the Iberian Peninsula since the Palaeolithic era.

The plants domesticated by Man were those that formed part of his daily diet or had something to do with his other daily activities. Among these was the “liana”, or vine, the subject of this book. Our cultivars began with the cultivation of the hermaphroditic mutations which occur rarely in nature (Forni, 2006). A genetic analysis of 1,201 different chlorotypes was conducted, using material from silvestris and other cultivar samples taken from the entire area lying between the Iberian Peninsula, the Middle East and North Africa. The results confirm the “polycentric theory” (Arroyo et al., 2006) of multiple domestication centres. This latter study also establishes that 70% of the grapevine cultivars carry the specific chlorotype from which Western European populations are derived. This lends support to the theory that grapevines and other botanical genera found refuge on the Iberian Peninsula during the Ice Age. It was only later that alien varieties came to Iberia with the successive Phoenician, Greek, Carthaginian, Roman, Arab and Crusader populations.

It seems that the domestication process was initially driven and controlled by cultural concerns, and that it was only afterwards that the customs of the colonisers (Phoenicians, Greeks, and Carthaginians) were introduced into the daily routine of people living in the Western Mediterranean (as at the find at Cuenca, Spain). One can therefore assume that in terms of the spread of Vitis silvestris, the introduction of wine drinking, and later the viticultural practices of the invaders intersected with those of existing local cultivation, already at the advanced stage of selecting the most suitable wild vines available.

The grapes of wild grapevines were used to make wine before cultivation of hermaphroditic cultivars occurred.

Carbonell (1820) makes reference to this by saying, “It is difficult to determine when exactly grapevines began to be cultivated. The answer to this question is lost in the mists of time. This is why the answer as to how wine was discovered is a mystery, as is the discovery of many other things in general use today”. It should be noted, however, that vinegar and salt were the most important preservatives in Antiquity.

As recently as three months ago, making vinegar from the grapes of wild vines was still considered normal practice in the Sierra de Cazorla, the Rumblar river basin (Zocueca), and the Sierra de Grazalema (El Bosque, Prado del Rey and Zahara de la Sierra) in Spain. Pharmaceutical offerings are full of medical remedies which come from Vitis silvestris. A newspaper article, dated 1796 on the plants from the Muy Noble y Real Valle del Mena region (Burgos), remarks that, “There are a lot of vines to be found in the mountains, on the roadsides and banks of rivers and lakes, and their fruit is suitable for producing grape juice.” Vines were suitable for making ropes and traps to catch fish off the Asturian or Cadiz coast, whilst tartaric acid, which comes from grape must, improves potter’s clay.

The Decline of Vitis silvestris

For all the reasons given above, it was indeed Man who over thousands of years brought about the cultivation of the species with the intention of enhancing the availability of this naturally occurring raw material in his immediate surroundings (González Bernáldez, 1992). By the same token, it is also Man who in his quest for progress and improved infrastructures has either directly or indirectly been responsible for the ever‑increasing destruction of the natural habitat of this vine. The first culprit was his construction activities (dams and reservoirs, bridges, and roads), expansion of agricultural and forestry areas, and even clearing ditches on the sides of roads. The most recent example worth citing is the building of the Alqueva Dam in the Alentejo. One further example would be the huge population of wild grapevines in La Algaida, near the mouth of the Guadalquivir, described by Spanish priest and ampelographer Clemente y Rubio (1807) as “forming an impenetrable jungle”, which has been reduced to a mere four examples today, because of deforestation and fires. The introduction into Europe of North American grapevine species as Phylloxera‑resistant rootstock in the 19th century and the direct producer hybrids have both contributed to Vitis silvestris losing much of its traditional habitat.

This phenomenon can be observed in substantial areas of the Iberian Peninsula, even in natural catchment areas, nature reserves, and other protected areas (Ocete et al. 2007). At the same time, especially near cities, habitats are being populated by another member of the Vitaceae family, originally grown as an ornamental plant. It is the Parthenocissus quinquefolia, or Virginia creeper, also known as five‑leafed ivy – and, ironically, in German, as “wild vine”.

These increasingly negative environmental factors have led to the wild grapevine, Vitis silvestris, being included on the IUCN Red List of Threatened Species in 1997. On the Iberian Peninsula, riparian bushes and other vegetation serve as habitat for a great number of wild grapevines, because they are hydrophilic. The vines support themselves on bushes and trees in order to gain access to sunlight. Wild grapevines have been found growing on the following tree species, amongst others: Acer, Alnus, Crataegus, Ficus, Fraxinus, Olea, Populus, Quercus, Retama, Rubus, Ulmus, Rubus.

They also appear in colluvial zones with moist subsoil, as is the case on the Cantabrian coast. Fig. 110 shows the approximate distribution of the most important wild grapevine populations centres in Iberia.

Generally speaking, the leaves are small to medium in size, with open to very open petiolar sinuses. It is typical of male vines to have male flowers only, which means they do not have a gynoecium. The female vines have female flowers with curved filaments. In the male vine, the size and number of inflorescences is greater; they contain globose, tricolpate pollen grains, with three pollination apertures at the end of the pollen tube during pollination. The female pollen grain has no pollination aperture (see Fig. 116 showing germinal aperture); rather it forms a sort of ovoid amorphous sac, incapable of forming a pollen tube. The grapes are characteristically small berries (Sampaio, 1947), red in colour, and have a low must yield. The number of seeds varies between 1 and 4 per berry. As regards morphology, the seeds are rounder than their cultivar counterparts. Statistical variance analysis of seed morphology has enabled a distinction to be made between the fossil seeds of wild grapes and those of cultivars. Wine from wild grapes, after maceration for a week, achieves an alcohol content of between 7° and 13.5°, depending on latitude, altitude, and the amount of protection foliage affords the grapes. Its colour intensity is higher than 10.3 and it has a distinctly tart taste. It should also be noted that when wild grapevines are cultivated in a vineyard, the grapes manifest a clear increase in berry size, and therefore yield, compared to the truly wild form.

No symptoms of Phylloxera infestation have been found in the roots of the wild grapevine, mainly because of the prevailing soil conditions in its habitat. Its soils are under water for several months during the year. The wild grapevines are riparian plants in pure sandy soils, as found along the banks of the Guadalquivir River, for example. Laboratory tests on sample plants taken from areas as diverse as Portugal and Hungary confirm high susceptibility,however,when wild grape vines are artificially inoculated with the pest. Other predominant pest species included the bud mite Colomerus vitis (Pagenstecher) and the rust mite Calepitrimerus vitis (Nalepa) (Acari, Eriophyidae), which also affect cultivars in many Iberian viticultural regions. Of the fungal infections, the most significant are those which invaded from North America at the same time as Phylloxera. They are powdery mildew, or Oidium (Uncinula necator [Schweinitz]) Burrill, and Peronospora, Plasmopara viticola (Berkeley & Curtis) Berlease & de Toni.

The degree of infestation of both types of pest, whether it was the mites or the cryptogamic parasites, could not have been a factor in the survival of today’s wild grapevines. Although it is possible that in some places plants perished because of fungal disease, negative human influence on its habitat has also contributed to the decline of the species. (See Ocete et al., 2007). To date, no marked symptoms of viruses such as GFLV (grapevine fanleaf virus, or Reisigkrankheit), which would have shown up in ELISA immunoassays, have occurred.

In addition to its uses mentioned above, the wild grapevine has significant phytogenetic potential, in that it can restore valuable genetic diversity to future vine breeding programmes, whether as cultivars or rootstock, as well as recreate wilderness ecosystems. In addition, by means of molecular markers, research can be conducted as to the genetic contribution of the wild grapevine to cultivars of the Iberian Peninsula. It is hoped that this article will help to bring about statutory protection for this endangered plant species.

Fig. 108: A wild grapevine has grown over a tree stump, trellis-fashion. In exceptional circumstances, wild vines, such as Vitis vinifera L. ssp silvestris, can survive in Phylloxera-free forests.

Fig. 109: The leaves of Vitis silvestris are smaller, but correspond in their polymorphism to those of cultivars. 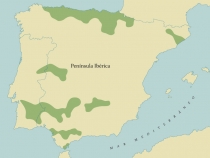 Fig. 110: In Portugal and in Spain the wild grapevine was able to survive primarily in areas to the North and to the South. Since nothing has been done to protect these species from disappearing, nor has a systematic record been drawn up as to their current locations, their - one might say almost random - identification is due entirely to a small number of responsible people. 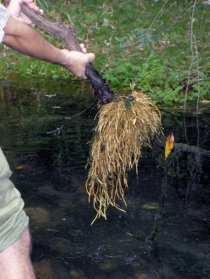 Fig. 111: Wild grapevines prosper predominantly on stream and river banks, where they are protected from the Phylloxera grape louse. This results in well-developed root systems, as illustrated here. 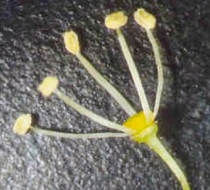 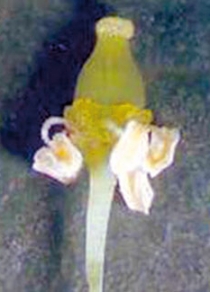 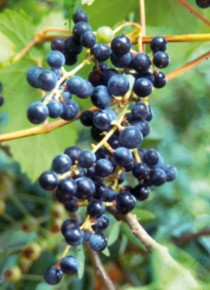 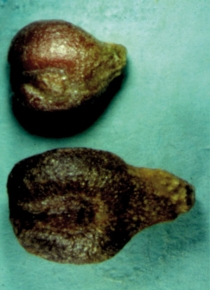 Fig. 119: Inflorescence in the male plant. 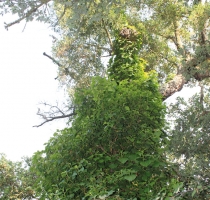