Grapevine sanitation as a basis for sustainable viticulture

Of the various factors which affect the productivity of a vineyard, apart from the technical aspects of vine conduction systems, environmental factors (climate and soil) and the genetic composition of each of the clones selected, the most significant are cryptogamic diseases and the effects of systemic pathogenic agents (primarily viruses and phytoplasms).

As far as the three factors affecting productivity are concerned, the professional wine sector – comprising viticulturalists and nurserymen, including forward‑looking companies who promote appropriate professional training – has managed to improve the situation significantly, at least in certain viticultural regions.

Without a doubt, cryptogamic diseases constitute the most important factor when it comes to sustainable vineyards, irrespective of the propagating material. Unlike systemic infections by pathogenic agents, cryptogamic diseases can be cured if subjected to specific treatments. Cryptogamic diseases have coexisted with the vine for a very long time, and have thus spread throughout the world, with the expansion of viticulture itself. In order to solve the problems caused by these agents in Portugal, support has been provided by various national programmes, such as AGRO and VITIS, and international programmes such as the one funded by NATO Science for Stability programme, the PO‑Plant Virus project, all of which have developed valuable work in the areas of diagnostics and the prevention of diseases through sanitation practices and selection. The change in legislation regarding the irrigation of vines and technical support provided by the new viticultural associations, as well as the financing and monitoring of technicians within the scope of integrated pest management (IPM) also contributed to the country achieving greater approximation to international standards.

In fact, Portugal has had a prominent position in this sphere of research since the 1960s. Some studies conducted within Portugal, primarily on viruses involved pioneering research at an international level. Little of the important scientific knowledge accumulated in this way was put into practice, however, for want of structures which allowed such transfer of knowledge to occur.

Paying attention to the problems caused by grapevine viruses began in the 1950s, in the EAN Department of Plant Pathology with Humberto Dias, at the suggestion of Branquinho de Oliveira, since work had already begun on the selection of rootstocks in experimental field trials at the agricultural research station (Estação Agronómica Nacional – EAN) and at a designated nursery in Laje. It should be noted that the creation of the ICVG (International Council for the Study of Virus and Virus‑like Diseases of the Grapevine) was linked to a meeting in Oeiras organised by a group of internationally renowned virologists, including H. Dias.

In the field of transmission of viruses transmitted by nematodes (Nepovirus), the first studies were done in Europe on the role of Xiphinema index in transmitting Nepovirus, and on methods of remediation of contaminated soil which shorten the vineyard‑free period of such soils. In the area of diagnostics, which was accorded special attention, a research programme on virus diagnosis techniques was initiated which included latex fixation tests and passive haemagglutination in the 1970s, and immunoenzymatic techniques (ELISA) in the 1980s, often in collaboration with international institutions, such as Changins in Switzerland and the University of Bari in Italy. Additional electronic immunomicroscopy techniques were even developed for use in conjunction with the immunological techniques usually employed when using electron microscopy. Apart from allowing rapid diagnosis of vegetative material on site in the vineyard, these techniques also made it possible to monitor and evaluate the level of infection in the soils, by detecting the virus directly in the vector nematodes. In the 1990s the first successful diagnostic tests using PCR began in collaboration with Cornell University, USA, under the aegis of a programme financed by NATO, These activities contributed to the specialist training received by technicians who would later occupy key positions in both research and lecturing at various universities within the country, as well as in private enterprise.

Once viticultural material infected by systemic agents is no longer curable, new plantations need to use rootstock which is free from such pathogenic agents. Hence the preoccupation of viticultural countries with establishing standards applicable to viticultural material which culminated in European countries making official certification of propagating material for new vineyard plantings compulsory, and resulted in the certification process being regulated by specific legislation. This brought about a restructuring of the vine multiplication system, with the establishment of graft nurseries using grafts taken from sanitary selection material, or selection material sanitised by heat therapy and/or in vitro multiplication.

Initial studies of this material revealed elevated levels of viral infection in important Portuguese grapevine varieties, as illustrated by the following examples:

While other European countries with a long tradition in viticulture had significantly improved vineyard productivity, Portugal fell behind as a result of imprecision as regards the compulsory nature of certification which lasted until almost the end of the 1990s, and very little has improved in the last 40 years as far as productivity is concerned. In the meantime, Germany, France and Italy made drastic advances in terms of vineyard productivity (see Fig. 1), due in large part to the imposition of European Community legislation with regard to sanitation aspects, and their implementation in viticultural structuring programmes. As noted above, the situation in Portugal resulted in technical and scientific results obtained at national level not being considered in the restructuring of Portuguese viticulture. This led to the degree of infection not decreasing significantly on average in vineyard plantations in Portugal, although some private companies have been more proactive in striving to comply with international standards which, in turn, underlines the importance of the work done in this area. Some private breeders, who were concerned and had a greater awareness of the true import of this problem, took the opportunity to apply these techniques in large‑scale trials of propagating material. Substantial financial investment and support from various programmes was required to conduct a series of rigorous tests for more than a dozen viruses.

Before the invasion of the plagues which caused widespread damaged to vineyards in the 19th century, Portugal had a rich heritage in its autochthonous varietals, with their considerable oenological potential. While combining sanitary selection with genetic selection which took intravarietal variability into account brought about significant change in the situation, inappropriate policy support failed to achieve any great advances in average vineyard productivity, because subsidies were directed at promoting production rather than quality and because of the progressive degradation of traditional vineyards.

In short, grapevine selection served as the catalyst for substantial changes in Portuguese viticulture. Prominent wine‑making enterprises have won awards at international competitions primarily because they planted selected materials from among the major historical grapevine varieties which have good yields. Port wine itself is being more and more widely recognised as one of the best wines in the world. It should be noted that this viticultural miracle has come about in a relatively short period of time, and is due solely due to sanitary and genetic selection. It is foreseeable that with better harmonization of governmental regulations, the process of sanitary selection will also be extended to include small‑scale growers and less well‑informed large‑scale growers in the near future, thus heralding a return to an era of flourishing sustainable vineyards, as they once were in 17th and 18th‑century Portugal. 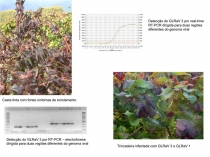