The Dão and Lafões DOs are included within the region which currently bears the designation Terras do Dão, and together, these areas formed part of the more extensive viticultural region already mentioned which was known as IG Beiras.

There are few vestiges of viticulture from Classic Antiquity in the Dão region, although 80 small wine presses dug out of the rock of various designs, sizes and from various periods have been found. With the presence of the Cistercian monks, charters and documentary evidence exists from the 12th century onwards. From the 15th century onwards, there are many documents attesting to the quality and economic importance of Dão wine. Because of the delay in Phylloxera reaching the plateaux of the region, vitiviniculture achieved its highest level of importance, unlike those viticultural regions which had already been destroyed by the American Plagues. It was in 1865 that António Augusto Aguiar promoted the idea of demarcating the region, but encountered difficulty in achieving this because of an unstable political situation. Demarcation only occurred in 1908, and was revised in 1910, and again in 1912 when the geographical boundaries of the DO as they currently stand were defined, as a result of the creation of the Comissão Reguladora do Vinho do Dão (Dão Wine Regulatory Commission), as it was formerly known. The renamed “Comissão de Vitivinicultura da Região do Dão” (CVRD) (“Vitivinicultural Commission of the Dão Region”) was officially approved as the certification authority mandated to regulate the production, trade and certification of vitivinicultural products entitled to bear the “Dão” and “Lafões” Designations of Origin (DO) and the geographical indication “Terras do Dão” IG. Legislation confirmed the demarcation in 1912.

In the geographical area currently identified as IG “Terras do Dão” (corresponding to the former Beira Alta area and the IG Beiras) there are two wine‑producing areas which have the Designation of Origin certification. The “Dão” DO, situated in the central north of Portugal in a mountainous enclave, is surrounded on the west by the hills Caramulo and Buçaco, has the imposing mountain ranges of Nave and Serra da Estrela to the north, which form and important barrier to the humid coastal areas and harsh continental winds. The soils of this region, where the vineyards are predominately cultivated at altitudes between 400 m and 500 m, but sometimes as high as 800 m, are granitic and of poor fertility, with schist outcrops to the south and west. It has a climate that, although temperate, is nevertheless extremely cold and rainy during winter and frequently very dry and hot during summer.

A little to the north of this region, wines can be produced bearing the “Lafões” DO. The soils, which are of granitic origin with spots of Precambrian schist, are often humid and fertile. The region does have some similarities with the Vinho Verde region, however, both in terms of the type of vine training systems used in the vineyard, where vines are grown on the borders of fields with other crops, or as “uveiras”, tall growing vines using trees or trellises for support, and in terms of the characteristics of its white wine (low in alcohol, high in malic acid and very fruity) and its red wine, which has a good ageing capacity.

The “Terras do Dão” IGP, includes the subregion with the right to bear the complementary “Terras de Lafões” designation of origin.

If the variety is classified as “noble”:

RED WINES:Must contain a minimum of 15% Touriga Nacional, and together or separately up to 85% of Alfrocheiro, Aragonez (Tinta Roriz), Jaen or Rufete.

WHITE WINES: Must contain a minimum of 15% Encruzado, and together or separately up to 85% of Bical, Cercial, Malvasia Fina or Verdelho 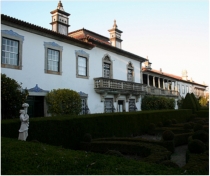 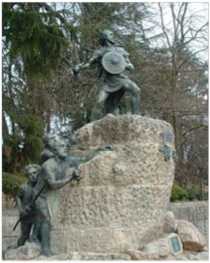