As buffers between the “Douro” and “Terras do Dão” regions are the “Terras de Cister” IG and the “Távora‑Varosa” DO, which although constituting a small region geographically speaking, is nevertheless very important as far as the production of sparkling wines is concerned, not to mention the fresh whites wines and suave reds produced there.

The Távora‑Varosa region is located in the foothills of the Serra da Nave. The current designation is not a new one but was created in 1999, and makes reference to the rivers Távora and Varosa, two tributaries of the Douro, and constitutes one of the first DOs specifically for sparkling wines in Portugal. It is the first DOC especially for sparkling wines in Portugal. Vineyard cultivation, at roughly 2,100 hectares, covers the municipalities of Lamego, Tarouca, Moimenta da Beira, Armamar, Tabuaço, São João da Pesqueira, Sernancelhe and Penedono.

The region bears vestiges of human habitation since prehistoric times and the successive Roman, Suevi and Visigoth settlements there. It was the place where the Cistercian monks chose to build some of the most beautiful examples of Cistercian architecture, such as the Monastery of São João de Tarouca which was the first of its kind on the Iberian Peninsula, constructed in the seventh century. It is a region of ancient culture linked to the historical roots of Portugal. The nobles who proclaimed D. Afonso Henriques as the first King of Portugal in 1143 did so at a meeting in Lamego, the capital of Távora‑Varosa.

Its edapho‑climatic conditions are unique, with predominately granitic soils low in lime, sometimes schistose with marked erosion and acidic, with a temperate and dry continental climate, with severe winters, making this a very special region for the production of wine even though the land itself is divided up into numerous small parcels and supports more than 10,000 viticulturalists.

This land of smallholdings lies on a mountainous plateau and has cold wet winters and hot dry summers. It is one of the zones which lends itself to the creation of exceptional characteristics in sparkling wines, and one of its subregions bordering on the Varosa river is host to one of the most famous wine‑producing houses, the Murganheira, with its cellar cut out of granite rock, reaching a depth of 72 metres below ground level.

The natural acidity, intense aroma and citrus character, sparkling and fresh of white wines lends itself well to enhancing their quality, the red wines too receive this delicate balance of aroma and nobility of, achieving excellent aromas over time.

The Comissão Vitivinícola Regional Távora‑Varosa (Távora‑Varosa Regional Vitivinicultural Commission), abbreviated to CVRT‑V, is the officially appointed certification authority for DO and IG products of this region.

The varieties to be used shall be established by IVDP, I. P. resolution, and adopted by the “Távora ‑Varosa” general council.

The varieties to be used in blending the wines concerned shall be established by an IVDP, I. P. resolution, and adopted by the “Távora‑Varosa” general council. 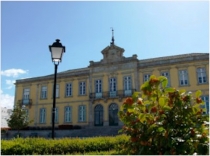