“Discovered by Portuguese navigators in 1418, Madeira Island soon captured the attention of the Infante D. Henrique (Henry the Navigator), who deemed it ideal for the planting of grapevines and sugar cane. Accordingly he sent for the Malvasia grapevine variety from near Sparta in Greece, itself originally taken from the Malvasia of Naples, and introduced its cultivation to this island.” Madeira wine acquired a great reputation. There are references documenting the first wine exports to England in 1456. By 1578, the exportation of wine had already become extremely important, and had become the island’s chief source of revenue. With the marriage of Chares II of England to the Duchess of Braganza, and Cromwell’s Anglo‑Spanish war, the wines of the Portuguese archipelagos attracted even greater attention from the English. A wine called Malmsey (Malvasia) became a favourite of the English. With the fall of Constantinople and the occupation of Greece by the Ottoman Turks, Madeira wine took the place of the famous Greek liqueur wines internationally, since under Ottoman rule distribution through the Venetian ports of the Greek product was prohibited. With advances in international maritime navigation, Madeira assumed an even greater importance. The renown of Portuguese wine was such that the brother of King Edward IV was accused of homicide and condemned to death. As a close relative of the King, he was allowed to choose the method of execution and chose to be drowned in a vat of Malmsey. Shakespeare refers to Madeira wine in his plays, particularly in 2 Henry IV.  The American Plagues of the 19th century put an end to the success of this wine. The hybrids condemned Madeira wine to the kitchen, where all they were good for was acidic sauces. It is only now, as a result of an excellent vineyard restructuring programme involving the grafting of varieties onto American rootstocks, and the clonal selection of historical varieties during the 1980s, that the Vitis vinifera grapevine varieties of Madeira have returned to the former excellent oenological quality.

Madeira Island covers a total area of 738 km2, and lies between the 30th and 33rd parallel North in the middle of the Atlantic Ocean. The mild climate and gravelly volcanic and basaltic soils helped the grapevine conquer the island and transform the landscape of Madeira. Around 47% of the total area of Madeira Island is situated above 700 metres and woodlands and forests flourish in its soils. Some 66% of Madeira’s surface has a percentage gradient of slope greater than 25% and only 11.5% of the land has a percentage gradient of slope of less than 16%. The very many small parcels of farmland largely support a very intensive and varied mixed crop and stock farming system, traditionally associated with the rearing of livestock and cultivation of maize, beans, potatoes, with grapevines on the plot’s periphery, growing on trellises or fences similar to those found in Minho.

There are 1,755 viticulturists, whose farms on average each cover an area of approximately 0.3 hectares. More often than not each farm is made up of more than one plot, each one measuring on average about 0.095 ha. In all, there are more than 5,000 vineyard parcels, meaning that vineyards cover a total extent of 1,700 hectares, with a little more than 500 hectares destined for the production of VLQPRD “Madeira”, which was already an export product in the 17th century. The areas chosen for this crop are the sunny south‑facing slopes, where, because the vines grow tall, they provide other crops shelter from the elements, although vines are also found on low trellises, especially if very close to the sea.”

Madeira DO wines: Liqueur wine less than five years old; Solera, with indication of age (5, 10, 15, 20, 30, or more than 40 years), with traditional mention in respect of the year of harvest (Garrafeira, Frasqueira [Vintage] and Colheita) and/or the production process used (Canteiro or Estufagem) 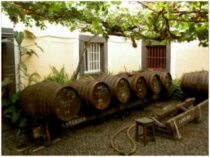 Vineyard terraces interspersed among other crops

Viticulture in an exotic environment
^