The grapevine, like other plant varieties, shows differences in its morphological and physiological phenotype. The relationship between the instability of varietal properties and environmental conditions is established in hereditary traits in terms of phenotypic malleability and selection: thus, the properties of the medium together with underlying genetic variation (phenotype) create conditions enabling plants to to adapt to their respective habitats.

The medium in which the plant lives is determined by various natural factors which influence its behaviour and reactions, metabolism, growth and ultimately, its development. Through observation and scientific experimentation one can discover certain general characteristics which determine the interaction between vine and environment, thereby permitting them to be seen as major factors influencing the quality of the wine.

It is this highly complex set of circumstances which initially gave rise to the notion of terroir. The concept of terroir encompasses not only climate, geology, topography and soil science but also the monitoring and control of the viticultural ecosystem, grape handling and vinification. Ultimately, cultural and socio‑economic factors play a part too, and these may be termed “terroir awareness”(Fig. 122).

Wine quality is also the result of the interaction of countless other components which range from factors such as natural biology, cultivation and cellar technology, set against the background of the social and economic fabric. More specifically, this means that wine quality is determined by the grapes and their maturity processes and these depend upon the interaction of soil and plants, as well as modifications made by the vintner’s viticultural techniques. In other words, the vintner can influence the expression of terroir in his wine, but by the same token, it can be observed in every distinct wine‑growing region that all wines of that region achieve a similar standard, as long as the cultivation conditions are comparable. This brings to mind something interesting Vauban, a French politician and gentleman said, “Le meilleur terroir ne diffère en rien du mauvais s’il n’est cultivé.” [“The best terroir is no different from an inferior one, if not cultivated”] (Sotés, Gómez‑Miguel, Pérez, 2010).

Our ancestors devoted much time to the observation of nature and the behaviour of plants in certain situations and thus acquired empirical knowledge. Through a step‑ by‑step approach and by trial and error they began to cultivate areas best suited to the production of quality wine, and to distinguish which areas, or regions, were better than others. Recent scientific progress in viticulture has clearly far exceeded the knowledge previously gained over centuries, and the use of analytical and statistical systems as well as geographical knowledge has forged a new way of looking at terroir and its demarcation with more precise factual and cartographical criteria than the past allowed.

Yet the prospects of settling the question of terroir on a global level are limited by the lack of basic oenological, socio‑economic and cultural data. It needs to be linked with the individual elements of the environmental medium (geo‑referencing). In this sense, a restrictive designation of origin for environmentally related terroir (vitivinicultural terroir) has been developed with the particular intention that this should only be used if the prerequisites and the various components of the environmental medium and the viticultural ecosystem are all present (Fig. 122, Gómez‑Miguel, 2009). The following definition of the basic concept of “vitivinicultural terroir” was adopted on 25 June 2010 by the OIV:

“Vitivinicultural ‘terroir’ is a concept which refers to an area in which collective knowledge of the interactions between the identifiable physical and biological environment and applied vitivinicultural practices develops, providing distinctive characteristics for the products originating from this area. ‘Terroir’ includes specific soil, topography, climate, landscape characteristics and biodiversity features.” (Resolution OIV/VITI 333/2010). This definition embraces various perspectives of terroir, such as geographic demarcation (zoning), and recognizes the widely accepted view of characteristic properties, the originality and unique quality of a product, place, or grapevine variety, yet also takes into account the specific effect exerted by natural factors such as climate, geology, and soil, acknowledging the influence of the grapevine variety as well as the viticultural and vinicultural techniques and practices applied. On the other hand, in order to ensure the product gains recognition and esteem, a whole range of other aspects has to be considered (See Branas, 1993).

When we talk in this context about environmental factors and their effects we are referring to the climatic and atmospheric variables such as sunlight, temperature, the composition of the air, humidity, rainfall, and wind. In addition, there are the geological factors such as the age and origin of the underlying rock; the soil‑related factors, such as temperature, water, and the soil’s physical and chemical properties. Furthermore, one has to consider geomorphological and topographical factors, which are related to the orography (study of relief mapping) and the features of the terrain in terms of its position as regards light, orientation, and degree of inclination, the impact of which is expressed by the interaction of climatic aspects and soil properties. Finally, one has to take into account the effect of biological variables on the plants (grapevine variety and rootstock), including the interaction between the various organisms and human activity. Each of these factors will be discussed in detail below.

Most current research on these variables is descriptive. Because one has to deal with and integrate this research, and because of the development in and availability of statistical programmes and geographic information systems (GIS), it is necessary to classify the individual elements as they relate to their respective geographical zones. The result is now being called “zoning”, or more precisely, “terroir zoning”, something which will be discussed in the last section of this article.

Spanish viticulture covers some 1,132,432 hectares (2007), and the Portuguese, some 230,000 hectares (2010). The majority of vineyards on the Peninsula are found inland, and moreover, cultivated in the valleys of its main rivers and tributaries.

All these river basins have valleys facing different directions, with different exposure to light which creates great differences in climatic and soil conditions. The ranges of altitudes and latitudes, taken in conjunction with the diversity of locations, geological structure, landscapes, different orientations and solar exposure, as well as their climates and soils, means that vineyards differ greatly from one another. Combined with the unparalleled wealth of grapevine varieties, these factors ensure a diversity of wine types such as occurs nowhere else in the world.

The production of quality wine on the Iberian Peninsula is based on legally defined characteristics. In Spain, broadly speaking, they are divided into quality wines tied to a specific geographical location, or designated origin (D.O.), quality wines with qualified designation of origin (D.O.Ca), and wines of designated origin with particular edaphic and microclimatic specifications (D.O. vino de pago and vino de pago calificado). The legal specifications are contained in the European regulations governing agricultural marketing (CE 1234/2008; DOUE L334 of 12 December 2008). In Portugal, the distinction is made between 14 regional wines (vinho regional) and 29 quality wine regions. (Coordinator’s note: To date, the classification of quality wines according to terroir has only been implemented in the Douro region). Fig. 123 shows the most important places of designated origin on the Iberian Peninsula. 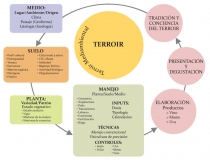 Fig. 122: Basic definitive elements of terroir: Interaction of factors determining habitat, such as climate, hydrology, topography, and physical and chemical soil composition; the vintner’s influence, the style of a wine through choice of variety, or specific cultivation and vinification techniques. Terroir encompasses more than just soil. Terroir means “to taste where the wine is from” (modified, after Gómez-Miguel).

Fig. 123: Designated origins (D.O.) of the Iberian Peninsula (Portugal and Spain), with details of the highest concentrations of premium grapevine varieties in individual regions. 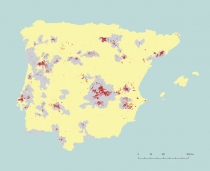 Fig. 124: Concentration of wine-producing areas on the Iberian Peninsula compared to various maps drawn up using environmental data (factors of the environmental media).
^