Because EU standards on grapevine production did not exist, no grapevine propagation material could be exported in the mid‑1980s. This created unpleasant drawbacks not only for the profession but also for grapevine selection projects, because the objectives of the EU certification scheme were interpreted differently. The government agencies involved in grapevine selection – and who make up the RNSV, Rede Nacional da Selecção da Videira (National Grapevine Selection Network) – were clearly in favour of a new selection methodology (the so‑called mass selection of different clones within the same variety, referred to in Portuguese as “massal de clones”) and researched their performance using a statistical method especially developed for small quantities, and viewed the conservation of genetic diversity within each variety as a desirable breeding objective. Other officials (from the plant protection services) followed the sanitary school of thought and aligned themselves with the goals of ICVG (International Council for the Study of Virus and Virus‑like Diseases of the Grapevine).

The latter worked to a high standard of sanitation, as is the case in progressive wine‑producing countries of the EU and countries in the new world of wine. Legislation was delayed by this discrepancy in objectives, which was what led PLANSEL to get the Nurserymen’s Association to pass an internal regulation enabling it to follow EU guidelines, and thus become “certified” some five years before the appropriate Portuguese legislation was in place. Official Portuguese legislation on the production, control, certification and commercialization of grapevine propagation material came into being in 1991 in the form of Ministerial Directive (Portaria) No. 1137/91. The new legislation gave due consideration to the most recent research findings of the ICVG. In terms of the new Portuguese legislation, the absence of 17 types of virus had to be verified, and made it impossible for the state breeders to submit their selected clones to the national certification board, since neither the test methods nor the appropriate reagents used for this purpose were available in the country.

It was at this juncture, with the help of various members of the ICVG (Prof. Denis Gonsalves of the Cornell University, Geneva, NY; Prof. Gugerli of Bioreba, Switzerland; Prof. Martelli, University of Bari; and Dr. Ibach and Dr. Rüdel, Forschungsanstalt Neustadt‑Mussbach), that PLANSEL tested its clones for all viruses both serologically and by grafting with grapevine indicator plants, and presented the first clones for trueness to type and for certification in terms of the new legislation on a trial basis in 1993. The competent authority, however, was avoiding a conflict with the RNSV, and delayed the certification approval procedure for more than a decade. An appeal via the internal legal process of the European Commission came to nothing. Only a claim submitted to the European Parliament (Strasbourg) led to a result, thanks to Dr Cruz Vilaça. The Ministerial Directive of 1991 was rewritten by a fresh team of experts, so that the state clonal breeders could be considered and genetic biodiversity within the Portuguese varieties could be maintained to a much greater degree than is the case in other wine‑producing countries. This resulted in a regulation on sanitation corresponding to the minimum level laid down in the EU Directive of 1968. Finally, in 2005, the clones of the most important grapevine varieties were officially certified and approved.

Caixa Agrícola Mutua de Montemor-o-Novo, 29. May 1998: Producers of propagation material, the State plant protection agency (CNPPA) and a member of the state grapevine selection committee (RNSV) working out the practicalities of the certification procedure in Portugal. 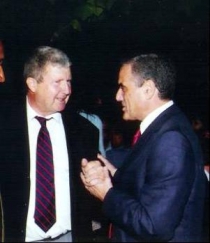