Diagnostic strategy when selecting candidates for clonal breeding. Concerted action was required in order to be able to comply with the long‑awaited Portuguese legislation (Ministerial Directive (Portaria) No. 1137/91. Under this directive, some 17 different grapevine viruses and their biotypes of Agrobacterium vitis and phytoplasma (flavescence dorée) had already been identified in the 1990s using established techniques. Identification was made possible by PLANSEL with the assistance of several national and international members of the ICVG. Prof. Guggerli, Changin (Switzerland); Prof. Denis Gonsalves, Cornell University, Geneva (NY, USA); Prof. Walter and Eng. Legin, INRA Colmar (France); Prof. G. Martelli, University of Bari (Italy), Dr. Rüdel and Dr. Ibach, Neustadt‑Mussbach Research Institute (Germany).

To validate the competence of the plant protection office and by reason of the low number of certified grapevines, intensive sanitary control and monitoring was applied with strict scientific rigour in Portugal during this period, especially with regard to the certification of standard propagating material in the nurseries. In those days, some nurseries were denied certification even on standard varieties, which in turn led to the sale of grapevines without labels.

At the time, PLANSEL took a chance on pre‑multiplication of potentially certifiable grapevine clones with consistent virus control at each phase of multiplication (ELISA at the EAN Oeiras and Biorebe in Basle). To this end, serum from different sources were used (Prof. Walter,INRA Colmar; Prof. G. Martelli, University of Bari, Cornell University, Geneva, NY).

At the same time, under the supervision of EAN, grafting of indicator grapevines of all clone candidates from PLANSEL and 20 clones from the RNSV was carried out and these were analysed jointly with international experts. INRA Colmar (Prof. Walter and Eng. Legin) assisted PLANSEL with the virus monitoring and control of rootstock (green grafting). In addition, all grapevine clones were subsequently revalidated through green grafting at Neustadt‑Mussbach (Dr. Ibach).

At Neustadt‑Mussbach all clones were first tested for Agrobacterium vitis (Thomas Schultze). The clones were tested for flavescence dorée (Phytoplasma) using ELISA. In collaboration with the department of Entomology at the University of Évora, a thesis was written by Jorge Araújo which provides proof of the absence of disease vectors in the Alentejo.

The grapevine breeding catalogue of Portugal which corresponded neither to the test facilities nor to the interests of state breeders, led to a conflict within the administration, which called into question for more than two decades the validity of certification.

This is what prompted PLANSEL to become involved in an EC project – NATO – Science for Stability – which thanks to PCR technology ultimately led to simplification of the process and being able to meet the minimum EC requirements, which in turn meant that the clones of both breeders could be certified in 2005.

PLANSEL sponsored several ICVG (International Council for the Study of Virus and Virus‑like Diseases of the Grapevine) meetings and seminars held at the EAN Oeiras plant protection department. 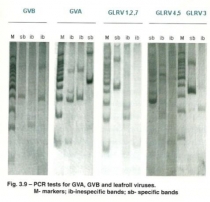 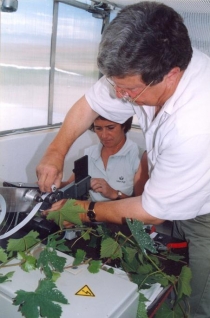 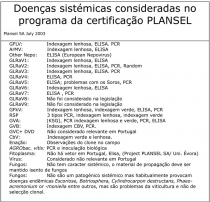