In 1983, when PLANSEL became the first vineyard in the Alentejo to a use high wire‑frame conduction system (training system), much scathing criticism was received from other viticulturalists. Especially once the irrigation of vineyards was approved, this type of conduction system became commonplace.

Since 1983 PLANSEL had been experimenting with various irrigation techniques. By 1986, it was clear that the Israeli long‑flow, in‑line and drip irrigation systems were far superior to others available at the time. At this time, the irrigation of vineyards was still prohibited by law. As a grapevine nursery, however, PLANSEL was exempt from this regulation and was able to irrigate its vineyards (top grafts and cutting nurseries with a guaranteed high degree of sanitation). Thus, PLANSEL became the model vineyard for other vineyard operations, which began using the technique shortly after the change in legislation in the 1990s.

PLANSEL attempted in various projects to increase the field capacity of the soil and at the same time, produce more efficient grapevine root systems using mycorrhiza.

The (KfW Project) technology transfer priorities were as follows:

Officially establishing lead grapevine varieties as recommended by the Porter Cluster (Weinwirtschaft, 2003) did not occur, neither was it possible to conduct systematic studies of terroir and regional grapevine varieties. Restocking of vineyards, therefore, was still taking place using traditional criteria. It is clear, however, that the traditional red and white grapevine varieties which were prodigious producers are slowly disappearing, and generally being replaced by quality grapevine varieties. A preference for the Aragonez, Touriga Nacional, Touriga Franca and Arinto varieties seems to be developing. As one of the largest grapevine nurseries in the country, and thanks to its willingness very early on to pass on pre‑multiplication grapevine selections to colleagues and customers alike, PLANSEL is in a position to make an important contribution to the improvement of the national grapevine stock. Over half of the certified grapevine material propagated in Portugal is derived from PLANSEL clones. 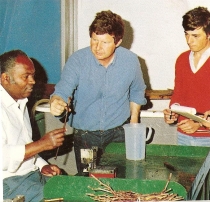