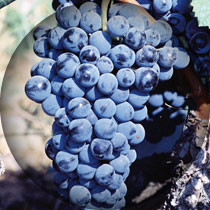 Origin: This is a new variety developed in either 1865 or 1885 by Henri Bouschet from Grenache and Petit Bouschet, the latter variety itself having been a Teinturier and Aramon hybrid developed by Louis Bouschet, Henri's father. Because of its high resistance to Oidium, high yield and colour intensity, this variety was planted in the South of France and in North Africa after the Phylloxera outbreak. The variety is used primarily as a high colour wine in Languedoc, albeit of a lower quality, since the climate does not allow it to reach full maturity.
It was produced on a large scale post-Second World War in Valencia and Castilla La Mancha) for Germany to cover that country's shortfall in red wine. In the 1940s, it became the red reference variety for Californian viticulture (13,000 ha). In Portugal up until the 1980s, this variety was limited to a few vineyards in Northern Alentejo. In contrast to France, the Alentejo produced a highest value quality red wine with this variety, which led to very strong new plantings from the 1990s onwards.

Trend: Light upward trend, with a great increase in Portugal over the last 20 years.

Varietal variability: Low, because it is a new variety.

Young shoot (form of tip): Fully open, with strong, medium density erect hairs. No hairs on stem, green with red stripes at nodes and internodes on dorsal and ventral sides.

Young leaf: Weak anthocyanin colouration of first six leaves, dense fluffy hairs at the internodes, but sparse at the nodes.

Sensitivity to abiotic factors: Vines are drought resistant, but sensitive to wind and Spring frost.

Pruning: Can be cane pruned.

Green pruning: With high vigour, foliage must be kept well-aired to prevent Botrytis.

Incidence of coulure/millerandage: Medium, similar to the Grenache.

Spoilage of mature berries: Good bunch quality when yield is not too large because of thick berry skins, and therefore well suited to machine harvest. Bunch Rot can occur if harvest quantities are too large.

Risk of bird damage: Problems occur because of its early maturity.

Wine type: Because of its high colouration, this variety is the ideal blending partner for red wines with low colour intensity. Its wine quality is exremely dependent upon heat, and is therefore particularly suited to the production of quality wine in the Southern continental climatic zones.

Natural acidity of must: Medium acid to alcohol ratio.

Risk of oxidation of must: Low, because of high concentration of polyphenols in flesh.

Tendency towards acidity loss in fermentation: Low to medium.

Ageing Potential: Good, although a reduction in tannins occurs in the barrel and bottle.

Blending recommendation: Because of its high anthocyanin content, when blended with varieties such as the Tempranillo or Trincadeira this variety has recently produced some of the most successful wines of the warm Iberian climatic zones.

Suitable as a varietal: Suitable, although primarily used as a teinturier when blended.

Wine Descriptors: Wines from the Alicante Bouschet variety from the right terroir and made from modest yields are initially characterised by fine, rich tannin notes and a deep red colour. Aromas of vegetation are overlaid by a high concentration of tannins, borne out by notes of dark fruits and extreme complexity in harmony with its acidity. These wines have good ageing potential.

Wine quality: Very good particularly as a teinturier in blends.